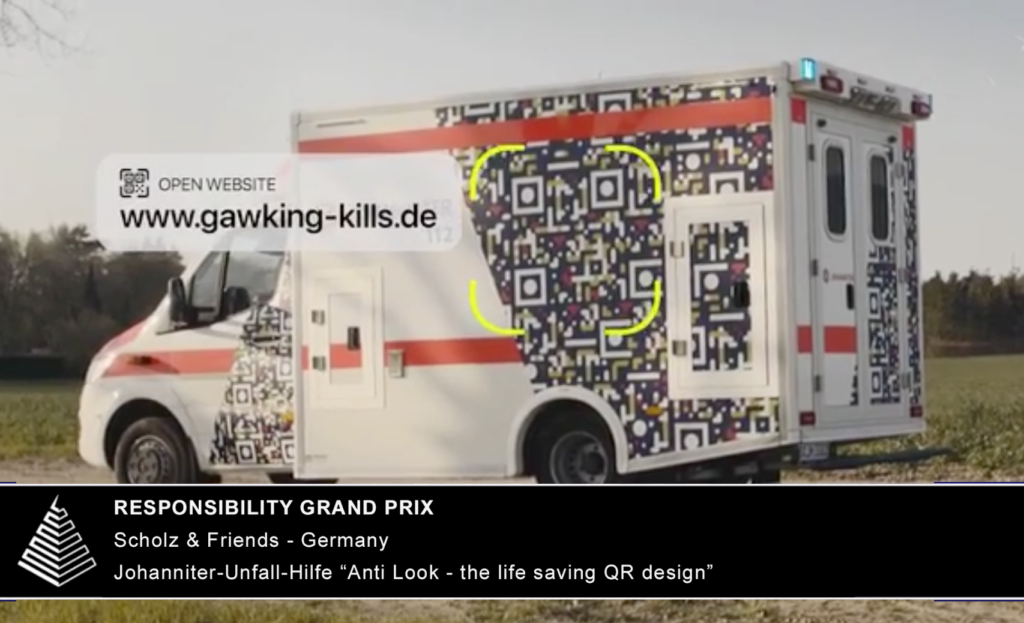 For the fifth year running, The Epica Awards and ACT Responsible once again join forces for a prize devoted to cause-related advertising. Gathered around David Griner, Jury President, the 15 jury members elected the Grand Prix among a list of 7 campaigns. More than just creativity the Jury member had to take in consideration the impact of the campaign on society and the truthfulness of the advertiser.

The Responsibility Grand Prix – celebrating work for good causes – went to “Anti Look, the life-saving QR design” from Scholz & Friends (Germany) for first responders Johanniter-Unfall-Hilfe. When people pause at the site of an accident to take pictures with their phone, a QR design on emergency vehicles and uniforms activates a message warning the gawkers that they are cluttering the area and may prevent rescuers from saving a life. The Responsibility Grand Prix is sponsored by ACT Responsible.

« What is remarkable about this campaign is that with such a simple idea, the impact on the work of rescuers is really real. In the event of an accident, it is often a matter of seconds to save lives , and this campaign allows these precious seconds! Also Johanniter, the association behind it, made it « open source » allowing other associations around the world to use it. This illustrates perfectly the power of advertising creativity when it comes to raising awareness on a large scale. We are very proud that the Epica Jury chose it for this very special Grand Prix. Congratulate to Scholz & Friends for their creativity and to Johanniter for their approach to sharing. » says Isa Kurata, co-founder of ACT Responsible.

Epica Awards editorial director Mark Tungate commented: “We’re proud to be able to partner with ACT Responsible to recognize the work agencies do in this field. Purpose-driven advertising and messages focused on social issues have taken on an even greater importance in this era of staggering challenges.”

• NETWORK OF THE YEAR: McCann Worldgroup

• AGENCY OF THE YEAR: Rethink, Canada

The Norwegian agency TRY also performed exceptionally this year, making it the runner-up for Agency of the Year, followed by Germany’s Scholz & Friends.

Founded in 1987, Epica is the only worldwide creative award judged by journalists from the marketing, design and advertising press, as well as specialist reporters in fields ranging from automotive to production.

Join the Advertising Community Together.

Affiliated with the United Nations Department of Global Communications and part of the UN Global Compact.